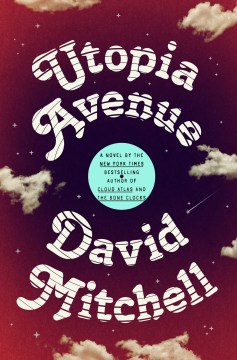 "Soho, London, 1967. Folk-rock-psychedelic quartet Utopia Avenue is formed. Guitarist Jasper de Zoet, a shy, half-Dutch public-school musical prodigy, was hearing voices long before he dropped acid. Keyboardist Elf Holloway must defy the prejudices of her bank manager father, her housewife mother, and her age to forge her own career. Bassist Dean Moss cannot, will not, spend his life on the factory floor like everyone else in Gravesend. Band manager Levon Frankland--gay, Jewish, and Canadian--is not unduly burdened by conscience. The drummer is a drummer. Over two years and two albums, Utopia Avenue navigates the dark end of the Sixties: its parties, drugs and egos, political change and personal tragedy; and the trials of life as a working band in London, the provinces, European capitals and, finally, the promised land of America. What is art? What is fame? What is music? How can the whole be more than the sum of its parts? Can idealism change the world? How does your youth shape your life? This is the story of Utopia Avenue. Not everyone lives to the end"--